Tell me, what is it you plan to do with your one wild and precious life? –Mary Oliver, “The Summer Day”

I moved to the Mojave Desert to escape my comfort zone. (Also, because I got offered an internship which would give me some much-needed field experience.) I wanted to live up to my own lofty ideals of “going where life takes me” and “living with no strings attached”. I’ve learned a lot out here so far—mostly in regard to plants and field work and desert life, but also about myself. I’ve also gotten a little braver.

One of my current heroes is Cheryl Strayed of Dear Sugar/Wild/Tiny Beautiful Things fame. When Cheryl was 26, she spent the summer hiking the Pacific Crest Trail (PCT) from California and Oregon. She did this alone. Solo. By herself. Sociologically speaking, women in our society are not expected to do things alone (ie: go to bars, eat dinner at sit-down restaurants, travel, walk through miles and miles of wilderness). Through reading her work, I have come to the understanding that Cheryl is not only brave enough to do all of those things, she is also compassionate and a very attentive listener.

The idea seemed crazy at first—I came to the desert to find plants, not to go gallivanting off to see writers. Portland was still a long way away—closer than it would be from Wisconsin, but still. It was on a Friday, I would have to take time off from work. I would have to drive to the Las Vegas airport. It would be frivolous—I should be saving money. Who would go with me? I casually mentioned the upcoming event to one of my friends who also loved Dear Sugar Radio, but she didn’t bite. So much for that idea.

I couldn’t shake it though. I really would like to go. My friends were going places on the weekends—Vegas, Death Valley, Iowa, Florida. Sure they were either reasonably nearby or places they had once called home, but still I didn’t really want to drive through Vegas. I tend to get lost a lot. You could take a train—you’ve never been on a train before. I looked it up—I could easily catch a train that would take me where I wanted to go. You said you wanted to be more adventurous.

It was like I dared myself to do it. I looked up the price of a ticket to the event, a round-trip train ticket, and a hotel nearby. I could do this. So I did. I bought all three in one day. Then I started telling people: my roommate, my parents, my friends back home. By that time, it was too late for them to talk me out of it—I already had the tickets. Actually, no one did actively try to talk me out of my trip. They said they were worried about my safety, that they wished they could go with me, that I was very brave to go all by myself. But no one said, “Don’t go”. For which, I was grateful.

My parents did request regular updates, though.

It wasn’t until I had already purchased the tickets and started informing people of my upcoming trip that I started seeing the parallels. Cheryl grew up in Northern Minnesota. I grew up next door in Northern Wisconsin. Cheryl started her hike in the Mojave Desert. I was travelling all over the Mojave desert for my botany internship. (Mostly in 4-Wheel Drive vehicles, but there was definitely some hiking involved.) Cheryl was 26 when she hiked the PCT. I’m 26 now. Cheryl ended her hike at the Bridge of the Gods, about 40 miles away from Portland. I was going to Portland. Basically, in my own way, I was kind of, sort of maybe, ish, following in Cheryl’s footsteps. That thought alone was empowering.

Ready to start my adventure! 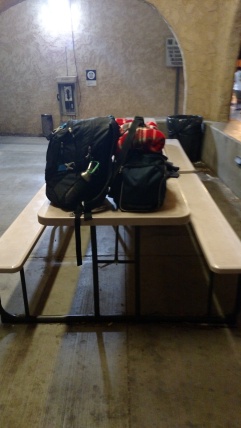 All packed up and ready to go!

My grand solo adventure was supposed to start at 12:30AM on a Thursday, but the train was delayed. It finally pulled up to the station at 1:32 AM. By that time, I was exhausted. I found my seat, stashed my luggage and fell asleep. Done.

The proper part of Thursday (the part on the other side of sunrise) was a blur arriving at LA’s Union Station, finding some breakfast, waiting for my next train, boarding said train, finding my new seat, and PA announcements about dinner options, and this is a non-smoking train, and our next stop will be.., and seriously people—don’t smoke on the train. I had a window seat and watched graffiti melt to mountains which gave way to the ocean, then vineyards, which later vanished into evergreen forests and misty lakes. I’ll admit that I didn’t pay as much attention to the scenery as I maybe should have. I was too busy reading The Small Backs of Children by Lidia Yuknavitch. It was a little more difficult to drift into dreamland the second night, but I managed. 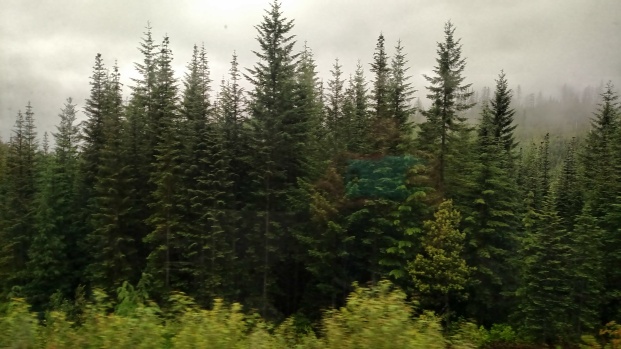 In the morning, I woke up to a seat-neighbor—it had been empty up until then. The lady next to me was retired and off to visit her family in Seattle for 2 or 3 weeks. I figured she was okay when I saw the book she had brought with her—A Mercy by Toni Morrison. We talked about her siblings and her grandchildren and her plans for the next few weeks. She asked where I was going and why. She seemed pretty impressed. “I love that your generation is encouraged to do that sort of thing. When I was your age, it was all about finding a husband and raising a family. Even working outside of the home was a big deal.”

When the train arrived in Portland, my seat-neighbor wished me luck and reminded me to “call your mama.” I stepped off the train. It was gray and less than 80°F—I wasn’t in the desert anymore.

I made it to Portland!

4 thoughts on “One Wild and Precious Life–Part 1”