For most of the year, the Horse Crippler looks gray and dead, but in the spring it develops reddish spines and even delicate yellow flowers. I only saw one bloom all summer–that’s rare in my book.

As an added bonus, here’s a photo of of a Desert Pincushion Cactus (Coryphantha chlorantha) in bloom. (California Rare Plant Rating 2B.1–Rare in California, but common elsewhere; seriously threatened in California).

So there I was,in the heart of the Mojave Desert, minding my own business searching for rare plants. When I heard a sound. At first I tried to convince myself it was just the hum of power lines, but no. It wasn’t a hum–it was more of a click, and it seemed to be emanating from the nearest creosote bush (Larrea tridentata). Actually, now that I was listening for it, I realized that most of the creosote bushes around me clicking away as well. A number of explanations floated through my mind: sentient trees, maybe I’d finally found my way into Narnia, bowtruckles, dehydration?, maybe my field partner was punking me, or it could be an insect.

Occcam’s Razor states that the simplest explanation is the most likely, so while I was really hoping for Narnia, I decided to go with the idea of an insect. To test my theory, I picked up a rock and threw it at the bush. I expected a grasshopper or something to hop away and that would be that. However, rather than silencing the creosote or scaring away an insect, my actions caused a renewed volley of even louder clicks. Great, just great–I made it angry.

Fascinated, I grabbed another rock. A little further experimentation confirmed that the initial result held true for the bushes in the immediate surrounding area. At that point, my field partner Kate found me accosting the local flora and demanded an explanation. Without any further details to go on, we did what any self-respecting millennial would do–we Googled it.

According to Google, the most likely sources of the mysterious clicking were Desert Clicker grasshoppers (Ligurotettix coquilletti). Apparently, a male Clicker will likely spend most of its adult life on a single creosote bush. They are extremely territorial for both feeding and mating purposes–the word on the web is that shrubs are more desirable if they have a lower concentration of the protective phenolic compound nordihydroguaiaretic acid. (I guess the leaves taste better.) That explains why, rather than scaring the grasshopper away, a rock to the bush incited verbal reckoning.

I guess I learned my lesson!

**In reference to the title: Remember the Harry Potter Puppet Pals?

J.K. Rowling recently announced that there is an American school of witchcraft and wizardry on the East Coast. However, after spending several months in the Mojave Desert of California/Nevada, I have started to suspect there may be another school for budding sorcerers out West–or at least a lot of magic. Here is a list of my reasons:

Tell me, what is it you plan to do with your one wild and precious life? –Mary Oliver, “The Summer Day”

I meant to post this a while ago, but life, moving, and limited internet access got in the way!

My train wasn’t set to leave until 2:30PM the day after the Dear Sugar Radio Live taping. It may have been wiser to spend that time sleeping since I would be spending roughly 30 hours riding in trains and buses, but I had never been to Portland before. I opted for adventure. The first thing I discovered is that nothing opens in Portland before 10AM. Except the coffee shops. After strolling through mostly-deserted streets for an hour, I found my way to Pioneer Courthouse Square and finally found people.

Where do we go now?

After a while, I found Powell’s City of Books, which claims to be the biggest new and used bookstore in the world. I believe it—the store takes up an entire city block. Needless to say, I was in heaven. I allotted one precious hour to wander the shelves, but really I could’ve spent the entire day there easily if I hadn’t needed to catch a train. On the top floor, in the Pearl Room, I found an autographed copy of Lab Girl, by Hope Jahren—a book I’ve been wanting to read anyway. It was like the Universe was telling me to buy the book. Who am I to deny the Universe? 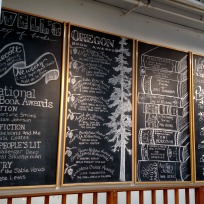 I literally needed a map.

I made it to the train station not long before my train started boarding. Before I knew it, I was speeding back to the desert. Sort of. After a few hours, I made my way to the observation deck and found a seat. While I knitted a blanket, I listened to Sarah Hepola’s Blackout: Remembering What I Drank to forget. At some point, a woman from another car sat in the seat next to me. We didn’t talk much. I was knitting with headphones and she was reading Geek Love by Katherine Dunn. Still, there was an unspoken comradery between us that made me wonder if she was traveling alone as well.

Sunday was a marathon. It started at 6AM when the train I’d caught in Portland arrived in Sacramento. From there I took a bus to Stockton, then a train to Bakersfield, and another bus to LA. I arrived at the Los Angeles Union Station about an hour before my final train left for Needles. I was exhausted. 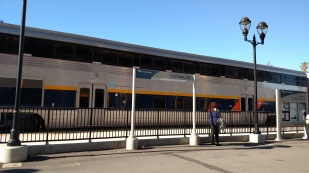 The very last leg of my journey was a six-hour train ride. I was hoping to spend most of that time sleeping, but my body had other ideas. All the travel and sleeping in quasi-horizontal positions was starting to take its toll. Only a couple of hours in, my left leg started twitching. My calf muscles were so tight that my entire leg would jump to the left at random. This was a problem since there was definitely someone sitting in the seat to my left. Luckily, the back half of the car was empty at that moment, so I ambled over to the set of seats just behind the staircase where I knew there would be a little more room to maneuver and I stretched. Toe touches, hamstring stretches, quad stretches, cow/cat poses, child’s pose, lower back stretches, shoulders, triceps, forearms, neck, upper back. At some point my nose started bleeding and I had to stop. Once the bleeding had stopped and my face was clean, I walked back to my assigned seat, reclined it as far it would go, and lost consciousness.

The next thing I knew, the conductor was announcing “Needles in ten minutes.” I folded my blanket, made sure I had all my belongings, and made my way down the stairs to the loading door. The train slid to a stop. The doors opened. I dragged my luggage and my sluggish feet to the cars where my roommate was waiting to pick me up. I had made it.

During the podcast taping in Portland, Cheryl explained a concept she called “retrospective fun.” Essentially, it means that you aren’t necessarily having fun in the moment, but when it’s all over and you’re looking back on the experience you can say yeah, actually that was fun. A few parts of my train adventure to Portland definitely fit that bill. Overall though, it was a great trip—fun, inspiring, and empowering. I’m glad I went.

P.S. I pay my own electricity bill.